Abstract:
Nature exploits all available covalent and non-covalent interactions for unparalleled spatiotemporal control over hierarchical length scales of macromolecular and supramolecular structure. The complex interplay of electrostatic and other non-covalent interactions of charged macromolecules still poses many open questions that will require broad collaboration among the life and physical sciences, as well as input from the engineering disciplines to drive toward new solid-state structures and useful materials. Scientific questions related to the physics of electrostatic self-assembly and to its role in biology will be discussed. Recent advances in understanding and biomedical applications of polyelectrolyte complex micelles will be presented.

Biography: Matthew Tirrell is the founding dean of the Pritzker School of Molecular Engineering at the University of Chicago, where he has been since 2011, with a joint appointment as a senior scientist at Argonne National Laboratory. Tirrell received a B.S. in Chemical Engineering at Northwestern University in 1973 and a Ph.D. in 1977 in Polymer Science from the University of Massachusetts. Previous positions have been: professor (1977-1999) and head (1994-1999) of chemical engineering and materials science at Minnesota, chair of bioengineering at Berkeley (2009-2011), dean of engineering at UC Santa Barbara (1999-2009), and deputy laboratory director for science at Argonne (2015-2018). He has co-authored about 400 papers. one book and six U.S. patents and has supervised about 100 Ph.D. students and 50 postdocs in areas of polymer science, surface and interfacial phenomena, self-assembly and nanomedicine. Professor Tirrell is a member of the National Academy of Engineering, the National Academy of Sciences, the American Academy of Arts & Sciences and the Indian National Academy of Engineering and is a Fellow of the American Institute of Medical and Biological Engineers, the American Association for the Advancement of Science and the American Physical Society. He is advisor to several companies, both multi-national and start-up, and is a member of the Board of Directors of the Camille & Henry Dreyfus Foundation (grants to university faculty in the chemical sciences) and Wyatt Technology, Inc (a scientific instrument company). 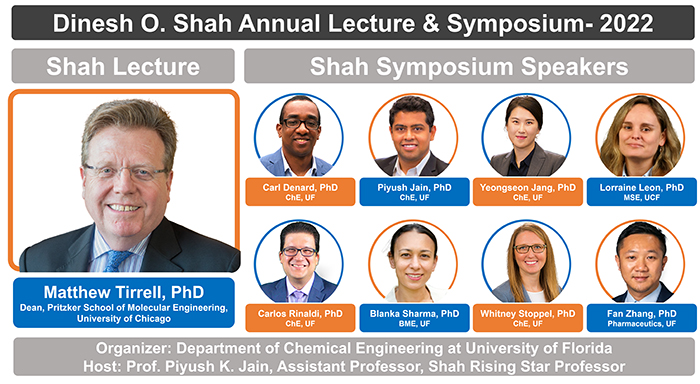 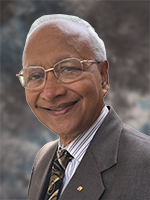 was established in the Chemical Engineering Department at UF by Professor Dinesh O. Shah because of his strong commitment to the university and the field of surface science. Professor Shah retired in 2005 from UF after a distinguished academic career spanning 35 years.

Dr. Shah has received numerous teaching, research and service awards, including: the UF Excellence in Teaching Award in 1972, the UF President’s Scholar Award in 1975, the UF Outstanding Service Award in 1976, the UF Teacher/Scholar of the Year Award from 1984-85 and the UF President’s Medallion for Excellence in Teaching and Scholarship in 1985. In addition, Dr. Shah was named the Florida Scientist of the Year in 1988, received the Vishwa Gurjari 1992 International Award for Outstanding Achievement and received the Pride of India Award in July 1993. In 1993, he was also named as Distinguished Florida Scientist by the Florida Academy of Sciences. In 1996, he was honored with the first Charles A. Stokes Professorship at UF. He has been the founding director of the Shah-Schulman Center for Surface Science and Nanotechnology, D.D. University, Nadiad, lndia since January 2008.